Baku, th capital and commercial hub of Azerbaijan, is a low-lying city with coastline along the Caspian Sea. Its famed for its medieval walled old city, which contains the Palace of the Shirvanshahs, a vast royal complex, and the iconic Mailden Tower. Comtemporary landmarks include the Zaha Hadid-designed Heydar Aliyev Center, and the Flame Towers, 3 pointed skyscrapers covered with LED screens.

Landing at the Baku International Airport

Meeting with the company representative at the arrivals hall

Transfer to the hotel (duration: 30-35 minutes)

Arrival at the hotel, assistance with check-in process (registration time: 14:00-15:00)

Spare time to freshen up

The excursion covers the entire central part of the city with a display of the major historical and architectural sites.

Our first stop is Old Town that is in the heart of Baku. Here, on the hill and in front of the Caspian Sea, the ancient city was born. Several dozens of historically architectural monuments are located in the territory of Old Town (UNESCO’s World Heritage): Palace of Shirvanshahs, Maiden Tower, Museum of Miniature Books, caravansaries, mosques, baths, etc.

Cultural Center named after Haydar Aliyev – one more epic showplace, modern complex construction. The centre project and design belong to the famous architect Zaha Hadid. The construction of the building was covered on the channels of Discovery and Science Channel, dedicated to the most courageous engineering projects of modernity and architectural masterpieces of the world.

Photoshooting on the background of Cultural Center and in the field of “I love Baku” sign.

Today's excursion ends at the upland park – the spectacular place where you can enjoy an unsurpassed view of the city.

Transfer to Gobustan (60 km far from Baku) is widely known not only in Azerbaijan but also worldwide with an outstanding collection of rock engravings.

The petroglyphs of Gobustan, which are artistic chronicles of the past, bear great importance for the study of the pre-history of humanity.

You will also have a chance to visit quite a unique place - mud volcanoes. According to the number of active mud volcanoes, Azerbaijan ranks first in the world. Many geologists as well as locals and international mud tourists trek to this place and end up happily covered in mud which is thought to have medicinal qualities. In 2001 one mud volcano 15 kilometres from Baku made world headlines when it suddenly started spewing flames 15 meters high.

explore all the outskirts and sights of the Absheron peninsula. Transfer to the temple of fire worshipers – Atashgah (30 km far from Baku).

Azerbaijan is one of the few places on the earth where even today one can observe elements of preserved fire cult and the ancient Zoroastrianism religion. For example, Atashgah is known for such a unique phenomenon as burning natural gas outlets (underground gas, coming onto a surface, contacts oxygen and lights up). The temple in its present state was constructed

in the 17th-18th centuries by the Baku-based Hindu community related to Sikhs. The pentagonal complex has an open courtyard with temple-altar in the centre which was the place of pilgrimage for worshippers.

The final destination of today’s excursion is Azerbaijani exotic Yanardag (“burning hill”). And this is real a burning hill – not metaphorically, but literally. Meter-long tongues of fire cover the stratified earth approximately 10 metres in width.

Drive to the hotel or drop in the city centre

Breakfast at the hotel

Transfer to Baku International Airport (in case of late departure, suitcases can be left in the hotel) 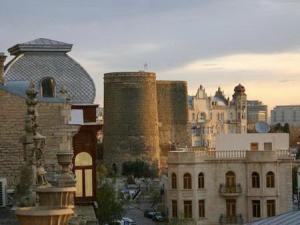